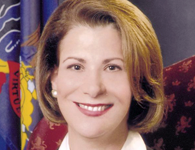 domain case in which a property owner contended that the defendant improperly attempted to take possession of its land to construct and maintain electrical lines and facilities.

In siding with WMPI Land Corp., which leases land for coal mining operations, the three-judge Commonwealth Court panel reversed an earlier ruling by the Schuylkill County Common Pleas Court that had ruled in favor of PPL Electric Utilities Corp.

The case had its roots in a declaration of taking action initiated by the utility in which PPL contended it needed to condemn a tract of land owned by WMPI in Gilberton Borough in order to operate, maintain and potentially reconstruct overhead and underground electric distribution lines, including poles, towers, wires, fiber optics, fixtures and other apparatuses, the record shows.

Gilberton is about a two-hour drive from Philadelphia.

The utility filed its eminent domain action in late January 2011, and WMPI filed preliminary objections in mid-February of that year, arguing that PPL did not comply with certain procedural requirements in cases of condemnation.

Specifically, WMPI maintained that PPL failed to seek approval from the Pennsylvania Public Utility Commission prior to moving forward with its declaration of taking.

WMPI argued that this lack of approval nullified the utility’s eminent domain action.

Daniel Benedict, PPL’s distribution design supervisor, however, testified that “facilities that are currently existing could need to be relocated in some form, which would basically produce new facilities in place,” and he acknowledged that “electric facilities can mean a whole host of different things for PPL,” according to the deposition testimony, which was contained within the Commonwealth Court ruling.

During January 2012 oral arguments, WMPI withdrew all of its objections to the condemnation action except the one dealing with PPL’s alleged failure to seek PUC approval.

On June 27 of last year, the trial court overruled the objection, concluding that PPL was not taking the land in the case for the purpose of erecting or putting in place new facilities, but rather were simply looking to operate and maintain existing lines and facilities for the distribution, not transmission, of electricity, meaning PUC approval wasn’t necessary.

On appeal to the Commonwealth Court, WMPI argued that PPL’s “present intentions to condemn a perpetual easement and right-of-way on WMPI’s land only to maintain existing facilities is erroneous or an abuse of discretion because it is the Declaration, not intentions, that governs the terms of the condemnation,” the appeal’s court ruling states.

WMPI argued that allowing the condemnation without PUC approval violates Pennsylvania public policy, because a different type of facility could technically be built on WMPI’s land without any opportunity for PUC consideration of whether the act would be in the public interest.

The Commonwealth Court panel, however, singled out the eminent domain declaration as the problem, agreeing with WMPI that it is “broad and does not limit PPL to its presently stated intentions.”

“In addition, that the PUC has promulgated regulations and interim guidelines for approvals of high voltage facilities does not provide guidance regarding the PUC’s approach to eminent domain applications for distribution facilities,” the appeals ruling states.

Case law in such circumstances requires the court to conclude that PPL must seek PUC approval before condemning WMPI’s land for perpetual easement and right-of-way, the court wrote.