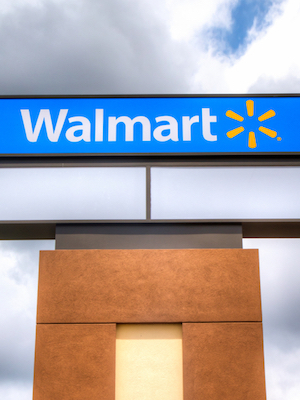 ERIE - A Walmart shopper failed to prove the grocery store chain was responsible for his injuries after a slip-and-fall in a Meadville store.

The U.S. District Court for the Western District of Pennsylvania granted Wal-Mart summary judgment against Xavier Rios earlier this year, and the timeframe for the plaintiff to appeal has expired. District Judge Susan Paradise Baxter ruled on the case.

Walmart pointed at Rios' extensive history of injuries, saying it cast a dubious shadow over his claims in the case. Rios was bitten by bed bugs on the job in November 2012, suffered an elbow injury in March 2014 that required 11 subsequent surgeries, had a rear-end motor vehicle collision after that, then slipped and fell in a former Target/Halloween-themed store restroom in October 2015.

All this in the midst of a 2013 hospital stay for a stroke and later diagnosis of high blood pressure and diabetic neuropathy in both of his feet, resulting in his use of a walking cane - a cane that Wal-Mart says he was not using on the day of the supposed accident, in a bathroom he claimed to have been in “a thousand times.”

“Rios had firsthand knowledge of what can happen when hurriedly walking into a public restroom without looking where he was going, given his previous slip and fall in the Target men’s bathroom," Walmart's attorneys wrote in a motion for summary judgment.

"This time, when entering the bathroom, he was even warned of the possible presence of water by the orange caution cone and still took no precautions. One would think that the knowledge of a previous slip and fall, coupled with a warning sign, would cause Rios to exercise some type of precaution for his own well-being; it is inexcusable that he would ignore the orange caution cone’s presence."

As for the judge's point of view, it noted that the presence of the cone in the bathroom isn’t enough to establish that Walmart was aware of any danger. It added that based on the worker’s testimony and Rios’ time in the bathroom, the bathroom was most likely cleaned about an hour before he entered, which makes it unlikely that the employee knew of a puddle of water by the time Rios got inside.

Given these factors, the court granted Walmart’s motion for summary judgment.

Rios and his significant other were shopping in the store when he started having stomach issues and needed to use the bathroom. When he went into the men’s room, be hurried to the second, handicap stall on the far end.

While he spotted an orange triangle caution cone, he didn’t look down on the floor before making his way to the stall. He was in the stall for nearly 15 minutes before leaving. Upon his exit, the orange cone was still there, yet he didn’t “pay attention to the floor to see if there was any water on it,” according to the decision.

He made it about three steps past the cone before he fell. Once he was on the floor, that’s when he saw a two-to-three-foot puddle behind his head. Rios said he’s convinced the water came from men who came into the bathroom while he was in the stall and said he didn’t see any water when he first got into the restroom.

He later told two employees about the puddle and that he had fallen. He was instructed to complete a Customer Incident Report. While he said his fall was a result of Walmart’s negligence, the court disagreed and granted summary judgment in favor of the store.

Want to get notified whenever we write about Walmart ?

Sign-up Next time we write about Walmart, we'll email you a link to the story. You may edit your settings or unsubscribe at any time.