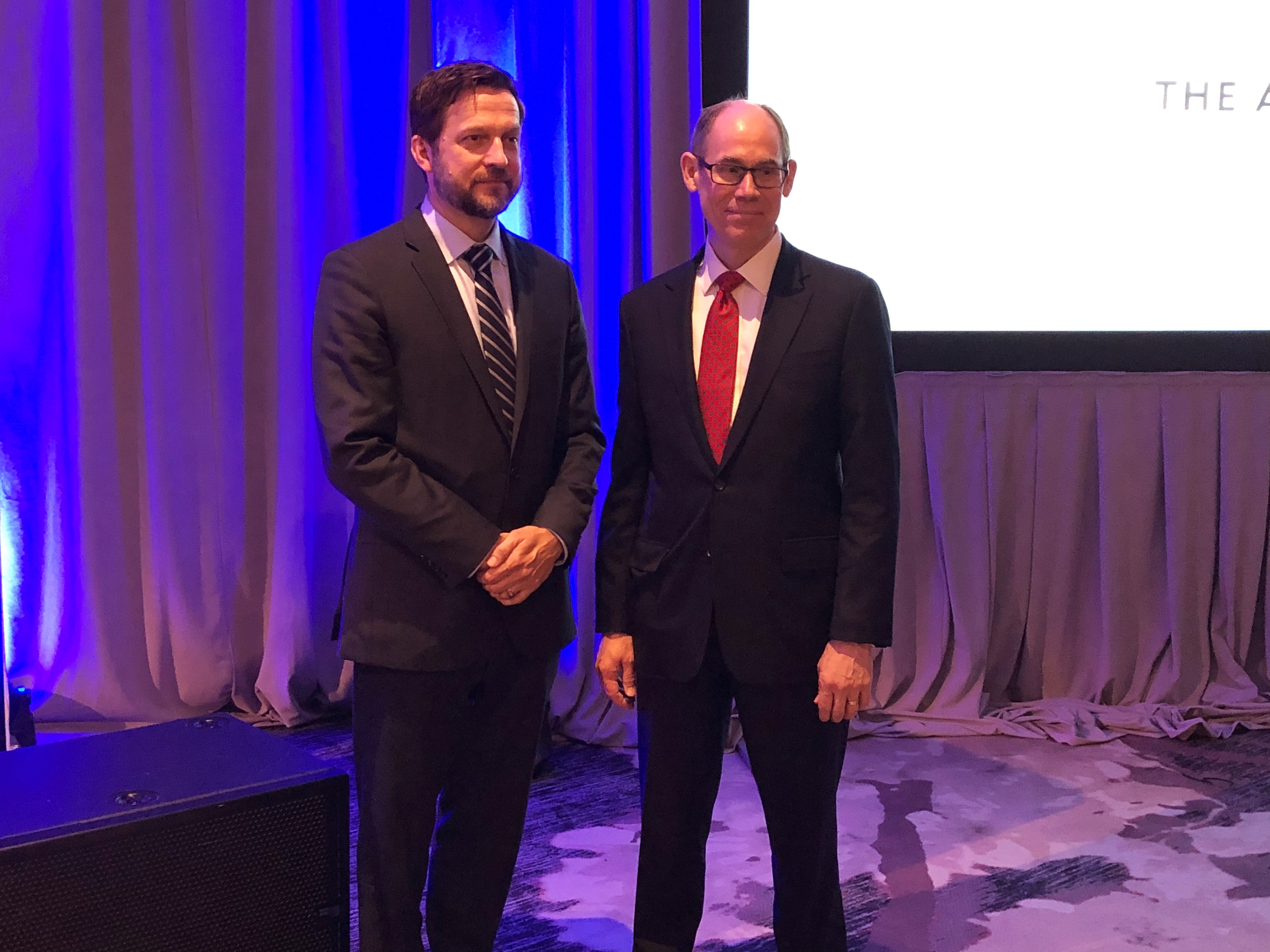 Assistant Reporter Kyle Logue (Left) and Reporter Tom Baker (Right) celebrated the approval of their Restatement of the Law of Liability Insurance, at the American Law Institute's Annual Meeting this week in Washington, D.C. | Nicholas Malfitano

WASHINGTON – Not everyone is as excited as those who drafted new guidance for judges about its passage.

After eight years, the American Law Institute’s Restatement of the Law of Liability Insurance received approval from the group’s membership at its annual meeting this week – though reactions to its passage remain mixed.

The ALI publishes the Restatement of Torts, which serves as a standard that judges can use to decide the law in applicable cases.

Tom Baker, the Restatement’s Reporter and a professor at University of Pennsylvania Law School, thanked the ALI, which is based in Philadelphia, for approving the document.

“We’re delighted the council passed the Restatement. We’re looking forward to publicizing it and providing it to the courts,” Baker said.

Kyle Logue, the Restatement’s Assistant Reporter and a professor at University of Michigan Law School, also expressed his gratitude for working on the project and its approval.

“This is a great honor, to be chosen to participate. There is a great sense of accomplishment after eight years of hard work,” Logue said. “I learned more about insurance law from our experts, to improve my teaching. I think we’ve produced a product that will influence the courts and improve the law.”

But, not everyone shares that same assessment.

Victor Schwartz, co-chair of the Public Policy Practice Group at Shook Hardy & Bacon in Washington, D.C., a life member of the ALI and one of a number of attorneys who offered constructive criticism of the Restatement, expressed his differences with the document.

“At the conclusion of this project, there are unfortunately a number of litigation fuel centers which remain that are not supported by existing law. Perhaps most notably, the Restatement recognizes a novel vicarious liability claim against insurers for the independent professional malpractice of retained defense counsel lacking ‘adequate’ malpractice insurance,” Schwartz said.

“A provision which invites new collateral litigation over what constitutes ‘adequate’ malpractice insurance. Hopefully, courts will be able to sort through this Restatement and separate the gold from the lead, and choose to rely only on parts of the project that are predicated on existing case law.”

Schwartz, who previously remarked that Section 8's inclusion of the word “substantiality” with respect to misrepresentation of material facts and rescission was “litigation fuel”, also made note of a policy in the Restatement’s Section 27(e) in “Damages for Breach of the Duty to Make Reasonable Settlement Decisions.”

Schwartz submitted a pre-filed motion prior to the annual meeting to amend that same section concerning underlying litigation resulting in punitive damages, saying it had no basis in case law and that in most states, punitive damages are not externalized.

Schwartz also stated that the sole basis for some of the Restatement’s principles were courts’ dissenting opinions, what he believed was an unprecedented rationale.

“In my 45 years, I’ve never seen any Restatements predicated on dissents alone. Judges should look at it selectively and treat the provisions as they would a law professor’s article,” Schwartz said.

However, Schwartz wanted to go on record as saying the Restatement project itself “should not be condemned as a whole.”

“Some of its principles are in the right tradition of Restatements, but others are more aspirational in their thinking and are not supported by any case law in the U.S.,” Schwartz stated. “The reporters worked really hard, took eight years and made changes. There are lots of improvements.”

Schwartz added the final document is not the “black cloud” that he believed it was a few years ago.

“There are some white clouds and some dark clouds. Hopefully, the right experts will be able to separate the white ones and the dark ones. The end result is better than it was a year ago,” Schwartz commented.

Laura Foggan, of Crowell Moring and an advisor on the Restatement project, also expressed concerns as to its potential consequences and implications during the annual meeting – specifically, with its Section 12 concerning the “Liability of Insurer for Conduct of Defense.”

Foggan pointed to Section 12(1)'s rules for providing of adequate defense and its hypothetical positing of issues such as substance abuse impairing defense counsel and leaving insurers open to subsequent liability, as having “significant collateral consequences.”

In effect, Foggan believed it placed insurers in the position of having governorship over both the personal and professional conduct of its own counsel, which may contain unanticipated consequences.

“It makes insurers gatekeepers, not licensing boards, liability courts and legislators. All three examples [of improper defense counsel conduct] are found on Page 114, and all have to do with substance abuse. To make insurers a second gatekeeper is extremely troublesome,” Foggan said of Section 12, calling it an “extraordinarily sensitive area” and urging the ALI membership to “not adopt a social experiment.”

At the meeting, Baker said that Foggan had been “invaluable” to the Restatement in her capacity as an advisor and labeled her “a very able advocate.”

Attorney Kim Marquand echoed Foggan’s point on “collateral consequences” for impaired attorneys and believed any litigator in such a position had the right to address their personal issues privately.

“Think about HIPAA and the protection of privacy,” Marquand said.

Marquand added the ALI’s goal was to hold insurers accountable if they override their own defense counsel, but cautioned not to place insurers in the position of determining the subject matter raised by the Restatement’s Section 12.

“Only two states, Idaho and Oregon, mandate malpractice insurance. They should not be made the determiner, insurers don’t practice law. These are skilled claims professionals in their field, but they aren’t lawyers,” Marquand said.

Michael Aylward of Morrison Mahoney in Boston, who also acted as an advisor to the Restatement and presented more than one pre-filed motion proposing amendments to the document, said he was currently “not feeling particularly happy” about the Restatement – but added he may have a more “considered” view of it next week.