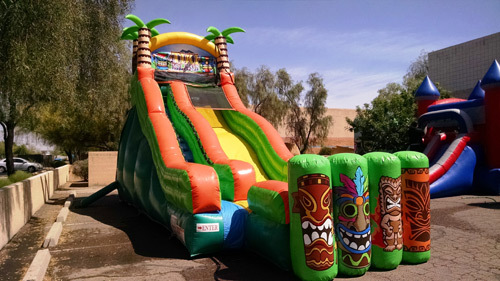 PHILADELPHIA – A settlement has been reached between the parents of a young boy allegedly injured on an inflatable water slide while attending a birthday party and the company allegedly responsible for the slide’s operation and maintenance.

Maria Troilo and Joseph Troilo (on behalf of their minor son, Luca Troilo) of Philadelphia first filed suit in the Philadelphia County Court of Common Pleas on Sept. 29, 2017, versus Bettes Bounces, LLC of Glen Mills.

(Julie Guarracino-Myers was later added as a defendant to the litigation.)

On July 30, 2017 of this year, Luca was an invited guest at a birthday party being held at a residence in Philadelphia. At the party, the defendant provided an inflatable water slide to the hosts of the party, who paid a rental fee for its use.

The suit said Luca was descending the Tiki Island Water Slide when, suddenly and without warning, he was caused to be propelled into the air by a dangerous and hazardous “bump” on the slide. This allegedly caused him to come to an abrupt landing and led him to sustain serious and permanent injuries, including a broken leg. The plaintiffs claimed the defendant committed negligence failed to ensure the equipment was safe to use.

Prior to settlement and for multiple counts of negligence and negligent infliction of emotional distress, the plaintiffs are individually seeking damages in excess of $50,000, plus punitive damages, costs, pre-judgment interest, delay damages and such other relief as the Court deems appropriate.

The plaintiffs were represented by Joseph M. Marrone Jr. and Brian M. Marchese of Marrone Law Firm, plus Jonathan M. Cohen, all in Philadelphia.

The defendants were represented by Mitchell S. Berger and Michael P. Ryan of Ryan Brown Berger & Gibbons, plus Michelle B. Cappuccio of Reilly Janiczek & McDevitt, in Cherry Hill, N.J.

Want to get notified whenever we write about Marrone Law Firm, LLC ?

Sign-up Next time we write about Marrone Law Firm, LLC, we'll email you a link to the story. You may edit your settings or unsubscribe at any time.