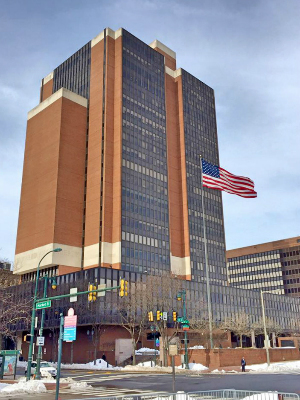 PHILADELPHIA – The widow of a man killed in a workplace crane accident has lost an appeal in federal court that sought to hold one of the corporate entities involved responsible for negligence.

On Nov. 7, U.S. Court of Appeals for the Third Circuit judges Patty Shwartz, Julio M. Fuentes and D. Michael Fisher ruled in favor of the defendants in the action, which had been appealed from the U.S. District Court for the Middle District of Pennsylvania.

Mrs. Grimsley filed suit asserting claims of negligence against the decedent’s fellow employee Kyle Mellott and a number of corporate entities, including The Manitowoc Company, Inc. and its subsidiary, Grove U.S. L.L.C.

However, the District Court granted summary judgment in favor of Grove and Mellott based on immunity under the Pennsylvania Workers’ Compensation Act (PWCA) and in favor of Manitowoc, for failure to state a claim of negligence. In response, Grimsley appealed to the Third Circuit.

Fisher said the District Court “did not err in granting summary judgment in favor of Grove and Mellott because Grove was the decedent’s employer and, therefore, it and its employees are entitled to immunity under the PWCA.”

At that time, courts would then turn to the common law test of control to determine the relation of employer and employee under the PWCA.

“Here, Grimsley fails to create a genuine dispute of material fact as to the functions of Manitowoc and Grove. Mark Klaiber, the defendants’ corporate designee, testified that Manitowoc ‘does not manufacture or produce anything’ but functions ‘as a holding company’ or ‘an umbrella organization simply for the ownership’ of several different product lines,” according to Fisher.

Fisher explained that “although Manitowoc publicly represented that it owned manufacturing space at Shady Grove, these mere representations do not call into question the fact that, according to the deed, Grove owns the Shady Grove facility.”

“After establishing the functions of the various entities, we conclude that the decedent’s work furthered the functions of Grove. The decedent inspected and prepared cranes for sale at the Shady Grove facility, which was owned and operated by Grove,” Fisher stated.

“Although his work may have involved filling out documents that included the Manitowoc logo, his work furthered Grove’s function of manufacturing and selling cranes far more directly than it furthered Manitowoc’s function as an umbrella organization that handled certain administrative matters.”

Fisher further said that Grimsley did not show that Manitowoc was the decedent’s employer.

“The NTCP identifies ‘Grove Cranes Worldwide’ as the decedent’s employer, lists the address for the Shady Grove facility, and omits a Federal Employer Identification Number. Grimsley fails to offer evidence that Manitowoc and ‘Grove Cranes Worldwide’ are the same entity, and Klaiber testified that the use of the name on the form was ‘sloppy reporting’ because ‘there is no such entity," Fisher wrote.

Fisher continued that the District Court did not err in granting summary judgment in favor of Manitowoc, because Grimsley failed to state a claim of negligence against Manitowoc, and that entity did not owe a duty to the decedent since it did not own the facility where the fatality took place.

“Furthermore, Manitowoc may not be held directly liable for any failure to adopt or enforce safety procedures. Although Mrs. Grimsley’s engineering expert concluded that Manitowoc owed a duty under industry standards, that opinion was premised on the assumption that ‘Manitowoc controlled the work that was being performed at the time of the incident.’ The question of who controlled the work at Shady Grove is a legal one, and the expert’s report cannot establish a duty by opining on a legal question,” Fisher concluded.

The plaintiff was represented by Robert F. Englert of RFE Law, in Swarthmore.