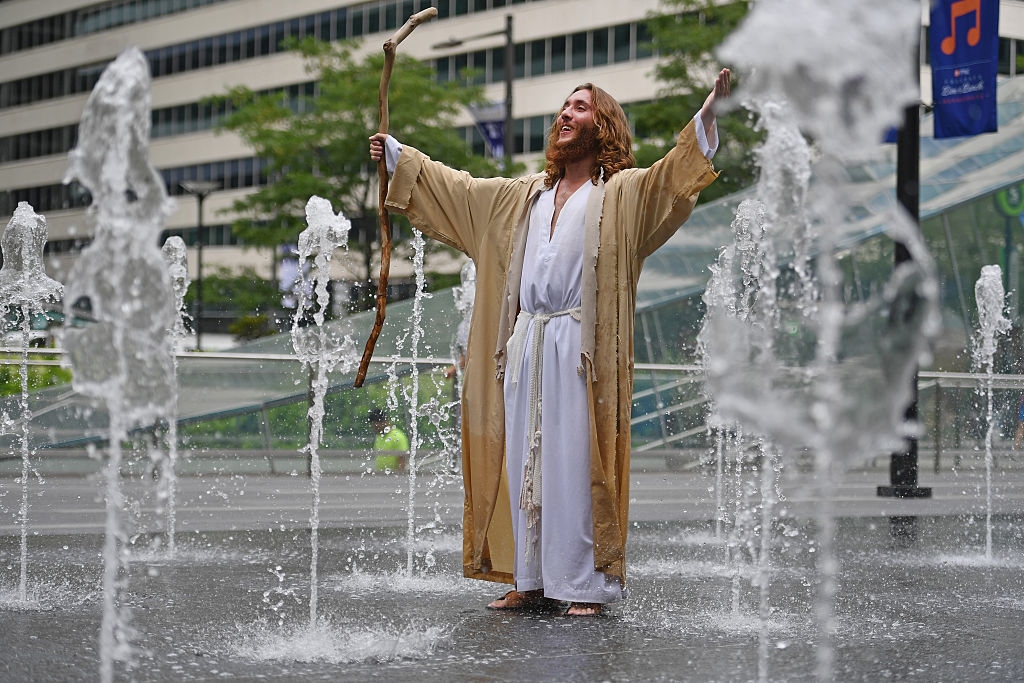 PHILADELPHIA – A street preacher locally known as “Philly Jesus” has initiated litigation against the City of Philadelphia and the Philadelphia Police Department, accusing the entities of violating his civil rights when he was evangelizing in a public park just before Christmas.

On Feb. 7, plaintiff Michael Grant filed suit in the U.S. District Court for the Eastern District of Pennsylvania versus the City and 11 unnamed Philadelphia police officers.

Grant, 33, describes himself in the lawsuit a street preacher and evangelist who maintains no permanent home and earns no regular income, outside of the charity of friends and family. Grant is also known among many Philadelphia citizens as “Philly Jesus," due to his perceived physical resemblance to Jesus Christ.

On Dec. 21, Grant says he was arrested while preaching near Philadelphia City Hall in the area of Love Park, which during the Christmas holiday season is transformed into an outdoor, holiday-themed marketplace named “Christmas Village."

Grant claims he was exercising his First Amendment rights to freedom of speech and freedom of religion, along with being next to a sign which read, “If you die, are you going to Heaven? Find out here?” or words to that effect, and had a basket for people to give gifts to him if they wanted to.

At that point, Officer John Doe approached Grant and allegedly remarked, “Do you know where you are going?” and “glared at the sign with disapproval" before calling on Grant to stop preaching and leave the area.

Grant says he then asserted his First Amendment rights to be present and preach in that public area. In response, Doe arrested Grant and placed him in handcuffs. Grant adds he was “dragged across the street by two Philadelphia police officers and held in handcuffs for approximately a half-hour.”

“The citation that defendant Officer John Doe issued to plaintiff contained at least one count under the ‘failure to disburse’ portion of Pennsylvania’s Disorderly Conduct statute, which was entirely inapplicable to any of the facts that occurred at or near that time. Plaintiff had in no way violated that statute or any other law in Pennsylvania.”

When Grant again asserted his constitutional rights, he says Doe let him go because “he knew plaintiff had broken no law and the arrest was wrongful.”

“The arrest was undertaken without probable cause and in retaliation for the exercise of plaintiff’s First Amendment rights. Street preaching and evangelizing is free speech, protected under the First and Fourteenth Amendments of the United States Constitution,” the suit states.

“The City of Philadelphia failed to properly train, supervise and discipline their employees to prevent the harassment, arrest and prosecution of musicians, panhandlers and others who are engaged in protected First Amendment activity.”

It’s not Grant’s first run-in with the Philadelphia Police Department.

He faced both a drug charge in 2009 and was involved in a fraud matter in 2014, pleading guilty in both cases and was sentenced to one year of probation for each.

A 2016 incident at an Apple Store in Center City led to his arrest for disorderly conduct and defiant trespass, charges for which he was later convicted in Philadelphia Municipal Court and sentenced to three months of probation.

For federal claims of violation of the First, Fourth and Fourteenth Amendments to the U.S. Constitution, plus state law claims of assault and battery, false arrest and imprisonment and invasion of privacy, the plaintiff is seeking unspecified compensatory and punitive damages, attorney’s fees and costs, declaratory and further relief, an injunction ordering the City to cease and desist from arresting street musicians, preachers and panhandlers and a trial by jury as to each count and defendant.

The plaintiff is represented by Vicki Piontek of Piontek Law Office, in Danville.

The defendants have not yet secured legal counsel.