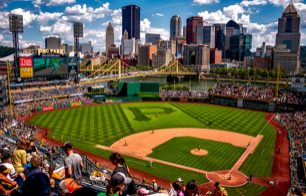 PITTSBURGH – This week, the Superior Court of Pennsylvania heard an appeal to decide if error was made in determining liability during the trial of a woman who initially sued Major League Baseball, the Pittsburgh Pirates and other defendants for damages, after being struck by a foul ball during a game in 2015.

Arguments in the matter were scheduled to take place Tuesday in Harrisburg.

The case began during a Pittsburgh Pirates home game against the Chicago Cubs at PNC Park on April 20, 2015, when plaintiff Wendy Camlin, a director of patient care for Obstetrics and Newborn Services at the University of Pittsburgh Medical Center, was in attendance and upon arrival at the stadium, made her way to her designated seat behind home plate.

Briefly turning her back to the field in order to navigate the row of seats already occupied by other spectators, it was at that point that a Chicago Cubs batter connected with a pitch and the foul ball rocketed backwards behind home plate. The ball struck the protective netting behind home plate with such force that the netting deflected, causing the ball to proceed backward through the netting and connect with the back of Camlin’s head.

Among her subsequent concussion-related injuries, Camlin suffered difficulties with focus, concentration and short-term memory loss – which all led to Camlin being unable to resume her duties at UPMC, which featured intensive time commitments and complex demands.

Camlin then filed suit in the Allegheny County Court of Common Pleas on March 11, 2016 against Major League Baseball, the Pittsburgh Pirates and the Sports & Exhibition Authority of Pittsburgh and Allegheny County, alleging that the defendants acted negligently in their breach of the duty to minimize the risk of injury to spectators or patrons at events held at PNC Park.

Seven months later, on Oct. 11, 2016, the Pirates and SEA joined Promats Athletics, LLC, the company responsible for designing and installing the netting behind home plate at PNC Park, as a defendant. The Pirates and SEA alleged Promats was negligent in its design and installation of the netting, whereas Promats filed a cross-claim and alleged Camlin’s injuries were the other defendants’ fault.

Nearly two years later, Major League Baseball was dismissed as a defendant on Aug. 24, 2018, as there was no evidence that the league had any responsibility for Camlin’s injuries. Furthermore, the Pirates and SEA confidentially settled with Camlin on Nov. 9, 2018.

The trial began on Nov. 16, 2018 and after 10 days, the jury returned a verdict awarding Camlin $454,000 in damages, consisting of $54,000 for past wage loss and reduced future earning capacity, $200,000 for past and present pain and suffering and $200,000 for future pain and suffering, embarrassment and humiliation, and loss of enjoyment of life.

The jury further found the already-settled defendants, the Pirates and SEA, were each 47.5 percent liable for Camlin’s injuries, while Camlin was 5 percent responsible and Promats was not liable at all.

However, that rationale did not find favor with the trial judge, John McVay Jr. of the Allegheny County Court of Common Pleas, in a July 25, 2019 opinion.

Calling Camlin’s decision to confidentially settle with the Pirates and SEA “understandable," he added it set up a situation in which those same defendants remained on the verdict slip for the jury to consider.

“The jury was unaware of the settlement and was tasked with determining, among all the parties, who may have been at fault for Camlin’s injuries. The jury ultimately found the Pirates and SEA liable and awarded money damages against them and not Promats,” McVay said.

“The plaintiff now asks this Court to overturn the jury’s decision because of displeasure with the amount awarded, and more significantly, who is liable. This Court did not err, and the jury’s verdict was entirely consistent with the evidence and does not so shock the conscience to warrant vacating.”

McVay opined that Camlin’s appeal should be dismissed with prejudice.

Attorneys for all parties did not respond to requests for comment from the Pennsylvania Record.