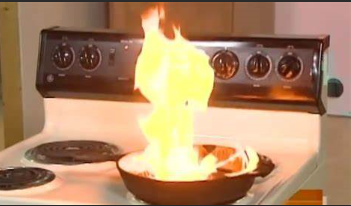 PITTSBURGH — A North Huntingdon man is suing a Monroeville woman for an injury allegedly suffered at her home during a grease fire.

Richard Thrift filed a complaint Feb. 19 in the Allegheny Court of Common Pleas, alleging Cynthia Thrift was frying chicken for Sunday dinner Sept. 29 when she left the stove to check on laundry.

Smoking grease in a frying pan activated the smoke alarm, he continued, and when throwing what she believed to be baking soda didn’t kill the fire, she grabbed the frying pan and attempted to run outside.

According to Richard Thrift, Cynthia Thrift spilled some of the grease, then slipped on it, causing her to toss the pan and its contents into the air, whereupon it fell on Richard Thrift, who had entered the kitchen to see what was happening. He said he suffered third-degree burns to 7 percent of his body, including his forehead, chest, torso, right upper arm, abdominal wall, lower legs.

Richard Thrift’s complaint alleges negligence and carelessness. He requests a jury trial and seeks judgment in excess of the county’s mandatory arbitration limits.

Delvecchio & Miller of Pittsburgh are representing Richard Thrift. The complaint does not make clear how or if Richard is related to Cynthia, and Richard's attorney did not return a message seeking comment.