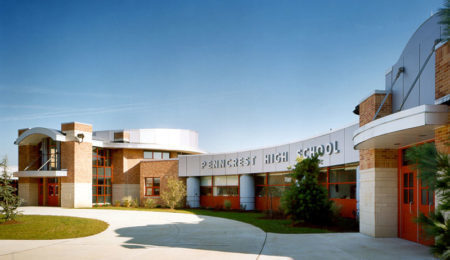 PHILADELPHIA – A lawsuit filed by the parents of a Penncrest High School special needs student, who sued the school district after their son was assaulted in the campus cafeteria, has been dismissed due to what a judge called untimely filing of their response to the district’s motion to throw the case out.

Brown’s parents claim the school district’s nurses failed to give proper care to their son, afflicted with autism and Asperger’s Syndrome, after he was assaulted in Penncrest’s cafeteria.

Per the complaint, “On Mar. 1, 2017, plaintiff Justin Brown was eating his lunch of a hamburger and French fries in the cafeteria of defendant Penncrest High School, when plaintiff Justin Brown was approached by one of the minor defendants, who hammered a savage punch upon the plaintiff’s face, with such force that you could hear the bones in the plaintiff’s nose and maxillofacial structure shatter upon such a brutal impact.”

Brown was bleeding after being injured, and sought medical assistance from school nurse Herman-Liu, the suit said.

“The assault upon plaintiff Justin Brown caused an immediate traumatic brain injury, and due to the concussive blow upon the plaintiff’s brain, plaintiff immediately began to suffer severe vertigo and took quite a bit of time to walk to the school nurse, defendant Alisa Herman-Liu’s office, on his own, as he was left unassisted by the supervising teacher or any other staff member of defendant Penncrest High School, in his attempt to reach defendant Alisa Herman-Liu,” the complaint said.

At the school, Justin was treated only for a nose bleed, and he was not taken to the hospital, as it was deemed “not necessary,” as per the complaint.

Seeking further medical assistance, the Browns then transported their son to the DuPont Hospital for Children in Wilmington, Del., the suit said.

There, they learned Justin had sustained permanent brain damage, diffuse axonal injury and shearing to his brain, a hematoma, a severe concussion, and at least six separate fractures of his left orbital floor, and a shattered nose and/or maxillofacial structure, the suit said.

The case raised the question of what kind of liability a school nurse can be exposed to.

Donna Mazyck, executive director for the National Association of School Nurses, previously told the Pennsylvania Record, “School nurses, like all nurses, are licensed by the state and have the same education, training and licensure as nurses in other settings. In Pennsylvania, additional certification exists for school nurses.”

When asked whether school nurses should receive immunity from lawsuits, Mazyck added, “It is not within NASN’s purview to prevent citizens from filing suits.”

U.S. District Court for the Eastern District of Pennsylvania Judge Timothy J. Savage granted the defendants’ dismissal motion on July 23, because “the plaintiffs have failed to file a response within 14 days of the filing of the defendants’ motion,” and thus considered it uncontested.

However, court records show the plaintiffs’ response to the motion to dismiss was filed the very next day, on July 24.

Among other statements contained within, the plaintiffs’ response motion argued their various civil rights claims were properly pled, the school defendants have no immunity from suit and that the school defendants should have known of the propensity for violent behavior possessed by their son’s assailant, minor defendant J.H., since he had been previously prosecuted in juvenile court for assault and/or battery and had previously attempted to set fire to the school science lab.

The Browns’ counsel did not respond to a request for comment from the Pennsylvania Record as to the timing behind the dismissal of the case, despite an opposing response to the defense’s motion being filed on the plaintiffs’ behalf.

Prior to dismissal, the Browns were seeking damages in excess of $5 million, plus interest, court costs, attorneys' fees, and punitive damages, as well as a jury trial.

The plaintiffs were represented by J. Conor Corcoran in Philadelphia.

The defendants were represented by Gabrielle C. Sereni and Tracey Dolin Waldmann of Wisler Pearlstine in Blue Bell, Katherine H. Meehan of Raffaele & Puppio in Media, plus Richard F. Klineburger III of Klineburger & Nussey, in Philadelphia.