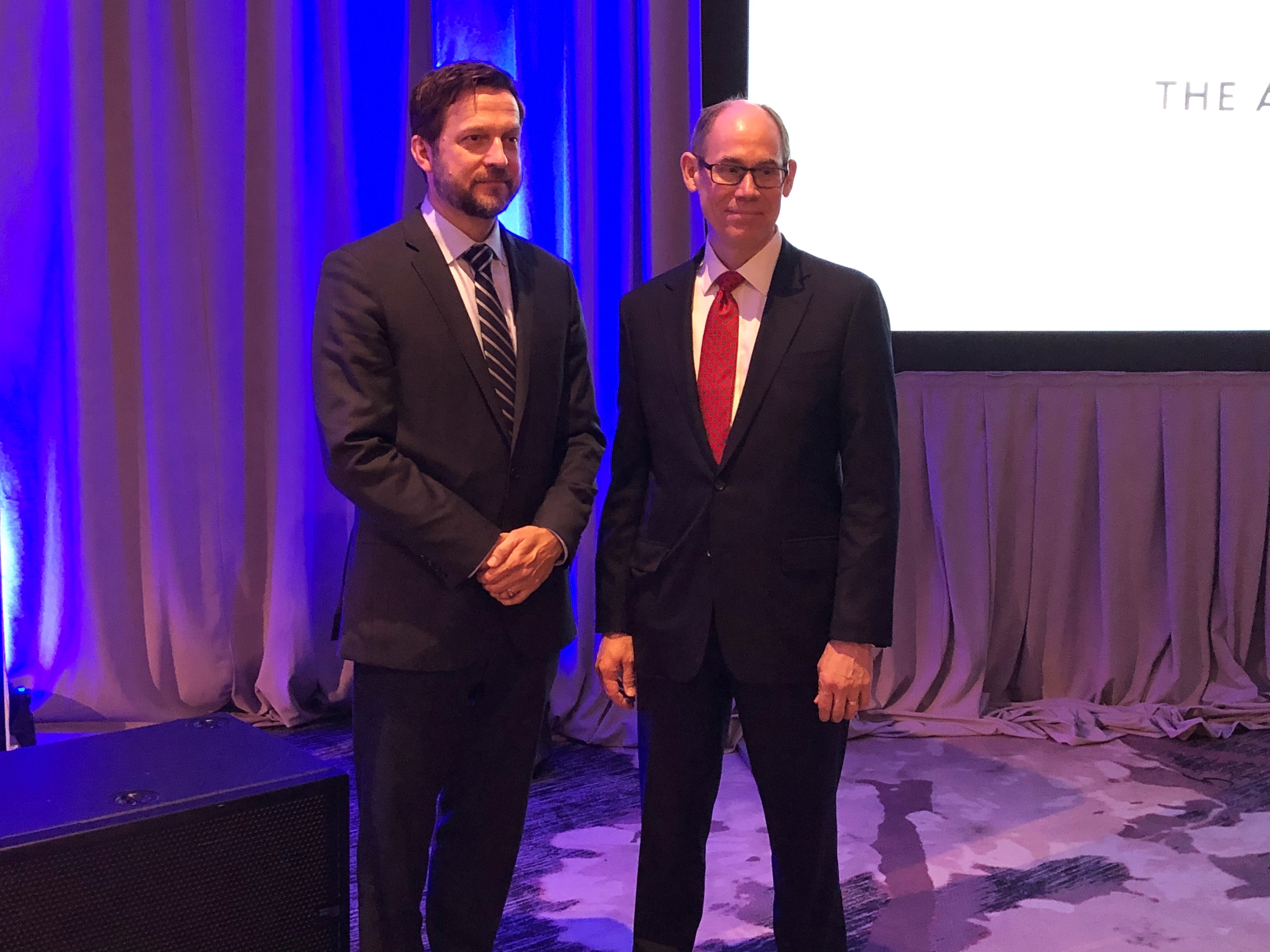 Assistant Reporter Kyle Logue (left) and Reporter Tom Baker (right) celebrated the approval of their Restatement of the Law of Liability Insurance, at the American Law Institute's 2018 annual meeting. Photo by Nicholas Malfitano.

PHILADELPHIA – It's curious that a group of lawyers and scholars that traditionally sought to help judges by restating existing laws - but has since been accused of trying to create its own - is involving federal judges as it explains itself, attorneys feel.

With the American Law Institute recently announcing it will convene a number of upcoming symposium events to discuss its now-adopted Restatement of the Law of Liability Insurance – including at least one hosted by a pair of judges in a federal courthouse – it has left some attorneys concerned about the appearance of such an action.

Kim V. Marrkand, member/chair of the insurance practice at Mintz Levin in Boston, expressed reservations about such a move. The Restatement has been called "litigation fuel" and brought up questions about whether the ALI is restating existing laws or attempting to create new ones.

It has been rejected by lawmakers in Ohio and a federal judge in Kansas.

“When I saw that federal judges were hosting this [upcoming event in Houston], I really felt that it was inappropriate for the American Law Institute to put a federal judge in that position, because one can then infer that maybe the judge is actually endorsing the Restatement,” Marrkand said.

“I did check with many ALI members and no one has really heard of a road show for a Restatement that actually has a conference sponsored by sitting federal court judges.”

The Restatement concerns when insurers can be found liable in civil lawsuits. Notably, an insurer would need to cover punitive damages in some instances, rather than the insured who engaged in the reckless behavior - even if they're not covered in the policy (a National Council of Insurance Legislators discussion provided a deep dive into other issues).

Marrkand wonders why debate of the Restatement’s merits wouldn’t take place between litigants, rather than during planned events.

“There, parties are represented by counsel and they can provide judges with a sophisticated analysis of the legal issues that have been raised. Then, in that setting, no one has an upper hand. I am concerned about a symposium where the lead Reporter [of the Restatement] is the featured speaker,” Marrkand stated.

The lead Reporter is Tom Baker, a law professor at the University of Pennsylvania. Marrkand added while the event has a “proactive” liaison to the insurer community, Laura Foggan of Crowell Moring in Washington, D.C., she was not included as a panelist in Houston.

“This is a very unusual development. I suspect that the judges have little idea of the controversy that has surrounded this whole Restatement, I suspect they don’t know that a liaison was actually appointed and still is functioning, and I suspect they don’t realize that this has never been done before,” Marrkand said.

“It’s one thing to have the American Bar Association or local bar associations or law firms sponsor things and invite panelists and speakers in, but it’s quite another to have sitting federal court judges with the prestige of their office for this Restatement.”

ALI’s Deputy Director Stephanie Middleton explained that there was no need for worry about the upcoming event in Houston or the discussion tour centered on the Restatement, as it will not discuss or impact pending litigation.

“The panel consists of Texas practitioners who represent insurers, and practitioners who represent policyholders, along with one of the reporters on the project. The will be no discussion of any active cases. As most lawyers know, Restatements are simply resources, valuable ones, that describe the common law from many jurisdictions. There is no cause for concern,” Middleton said.

Marrkand said her concern centered on “equal access” to justice.

“Judges have to be careful on two fronts: Is there a conflict and secondly, might there be an appearance of a conflict? I think here, this has certainly raised at a minimum the appearance of a conflict, as a neutral finder of the law about an extremely controversial Restatement, where you seem to be endorsing it. That can’t be right,” Marrkand stated.

Marrkand explained she had been involved with the Restatement project since 2012 and in the process, had met a number of “wonderful ALI members who are trying to do the right thing.”

“I think if the ALI members were asked about this, I think they too would raise an eyebrow and be quite skeptical of why are we doing this. It’s not the way this should be handled,” Marrkand said.

Another attorney who offered their view on the upcoming discussion forum events was Victor Schwartz, of Shook Hardy & Bacon in Washington, D.C. Schwartz explained he wasn’t necessarily for or against the forum events.

“I’ve been a member of the ALI for 45 years, I don’t recall any situation where the ALI tried to have a Restatement [discussion] with reporters in some kind of official action present something to judges. That doesn’t mean it’s wrong, it just means it’s new. What’s new is something that has the imprimatur or the stamp of ALI with the judiciary,” Schwartz said.

Schwartz added he found it interesting that federal judges were hosting the upcoming event in Texas, when state judges are the ones who create tort law, and further alluded to a landmark 1938 U.S. Supreme Court decision, Erie Railroad Co. v. Tompkins – which held that federal judges are required to follow state law when hearing cases under diversity jurisdiction.

“If I was trying to get Professor Baker’s treatise adopted by judges, I probably would go to state judges, because they’re the ones that make tort law,” Schwartz stated.

Schwartz postulated a hypothetical situation in which an insurer did not make a reasonable offer to settle and was facing possible penalties, and there was no Texas rule to follow in that case, the presiding federal judge would then look to impart their own interpretation of the law.

“Erie often has federal judges speculate as to state law on questions that the state courts have never thought about. That’s where it’s possible that this session could influence a judge to adopt a rule,” Schwartz said.